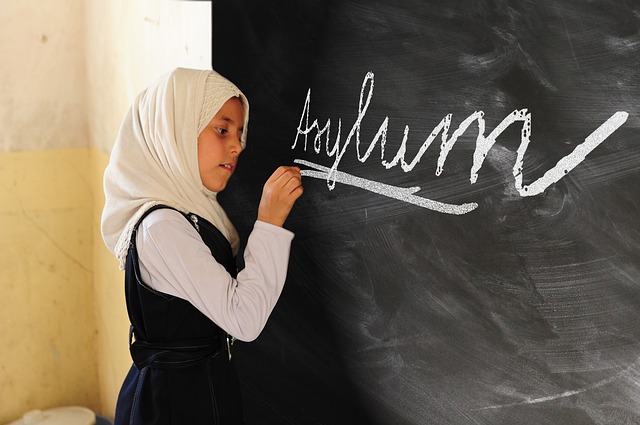 A few dozen children from Afghanistan are sitting at a desk in the U.S. Midwest. They listen intently to their lessons in math and English.

The hundreds of children living temporarily at the Fort McCoy base in Wisconsin are among 53,000 Afghans who left their country after the Taliban seized power in August and are being housed on military bases across the U.S.

Concerned to see young camp residents missing out on classes, three women refugees decided to set up their own make-shift school at the base, naming it Rise Again. We arrived at the camp to see children doing nothing. Nilab Ibrahimy was one of three school founders.

” We’re helping them to adapt and not get bullied at schools in the area. It’s a different life out there,” said the 23-year-old, a graduate of the Asian University for Women (AUW).

Funded in part by the Bill & Melinda Gates Foundation and other donors, the Bangladesh-based AUW provides scholarships for students from the most vulnerable areas of the country. When Ms. Ibrahimy, along with her fellow AUW student, Batool Benhnam, and Sepehra Azami started classes at Fort McCoy, they ran out of notebooks and pens. However, local charities and camp staff quickly responded to the appeal.

The three women created a curriculum lasting two months with the support of the ex-principal at an international school in Kabul.

This curriculum is for older students and includes lessons on Afghan culture and American civic education. The younger ones are provided guidance about what to expect in American schools.

“We provide extensive guidance for parents [as well],” to help kids.

So far, the Rise Again school has about 20 teachers and 200 students aged between seven and 14 at Fort McCoy, which is currently home to nearly 13,000 Afghans and has two other learning centers.

‘We want to give back’

The Taliban’s rapid conquest of Kabul took place as U.S. forces withdrew from Afghanistan and triggered a mass exodus.

Ms. Ibrahimy and Ms. Behnam were among the student leaders and helped to evacuate almost 150 alumni and students. They spent two days riding a bus through chaotic scenes, gunfire and bullet fire outside Kabul’s international airport. After that they boarded a plane without saying goodbye to anyone.

” We are worried about our family and miss them. Ms. Behnam used to be a volunteer in Afghanistan’s charity sector.

“It can be difficult to assist others in difficult situations, but that is what our parents taught us, and we must make a difference. .

Ms. Azami stated that she found it unacceptable to “do nothing” for refugee children at Fort McCoy.

Angie Salazar of Operation Allies Welcome, which is resettling Afghan evacuees, said three women’s initiative was a “testament and precursor to the contributions they will make as leaders as they resettle in the United States.”

“The educational outreach by the young women from Kabul to other Afghan guests, even as they prepare for their own settlement demonstrates … a genuine appreciation for education,” said Ms. Salazar, a coordinator based at Fort McCoy.

It is unclear exactly how many Afghan evacuees will be resettled in the United States, but the Pentagon has said it expects the total to exceed 100,000. They have been placed on military bases, where they are awaiting formal processing. This process can take several weeks according to aid agencies. In the interim, camp residents are experiencing changes, according to Mike Watkins (operations director of Team Rubicon), an NGO that supplies essentials for all bases.

While food security was the first concern, warm clothes will be a major focus once temperatures drop.

There is also increasing demand for educational materials and children’s games and toys as more bases consider setting up learning centers.

Ms. Ibrahimy hopes to support education programs in Afghanistan refugee camps, as well as other schools.

” Our long-term goal, she stated, is to ensure that Afghan refugee children, regardless of where they may be, do not get left behind.

This story was reported by the Thomson Reuters Foundation. Naimul Karim, Dhaka.